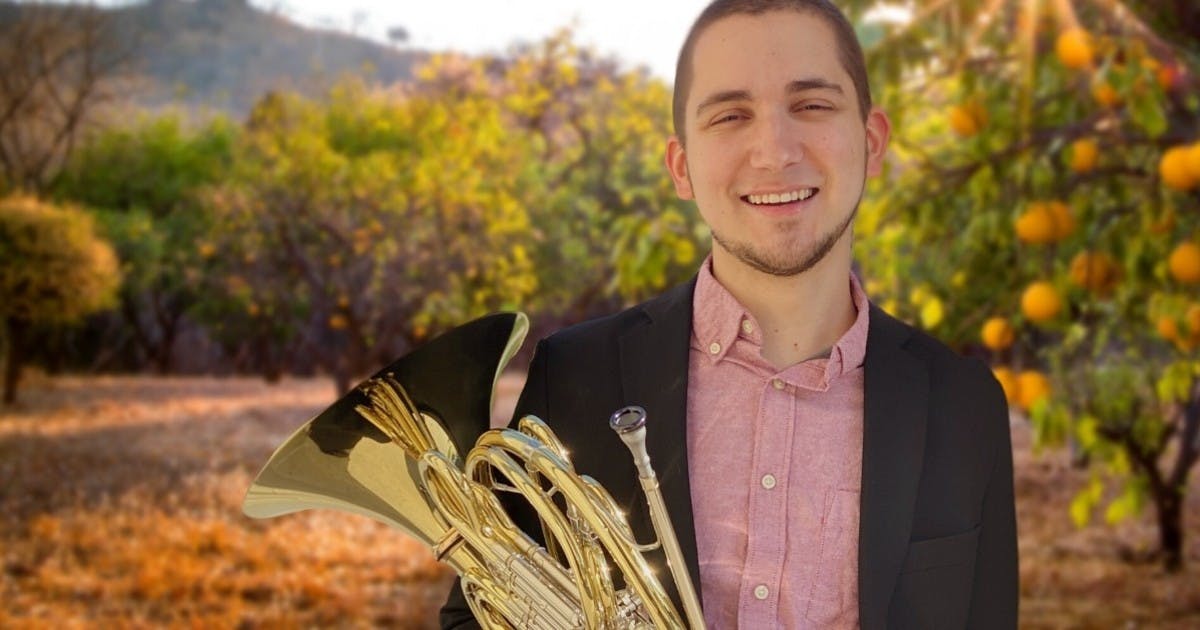 Jacob White began playing the horn at 10 years old in his hometown of Owasso, Oklahoma. Retired Owasso High School band directors, David and Jana Gorham, were his first teachers. After graduation, Jacob attended The Greenwood School of Music at Oklahoma State University, studying with Lanette Lopez-Compton. While at OSU, he actively participated in the Wind Ensemble, Symphonic Band, Orchestra, and various chamber ensembles. In his undergraduate studies Jacob also took the opportunity to perform with, compose, and arrange for the various OSU Horn Ensembles. At the end of his studies, Jacob was named the Presser Scholar for his graduating class.

Jacob received a Master of Music Degree in Horn Performance at the University of Redlands in California in Spring 2020. Freelancer, performer, and composer, Adam Wolf was his primary instructor. Jacob performed with the Redlands Symphony Orchestra, U of R Wind Ensemble, U of R Orchestra, the Pastel Winds, and the school’s Horn choir, for which he also acted as conductor. When not performing at the school, he was a freelancer in the Los Angeles area, performing with groups such as Encore Studios, the Southern California Brass Consortium, and the American Youth Symphony. Previously, Jacob has performed with the Symphony of Northwest Arkansas and the FOOSA Philharmonic in Fresno, California. Currently, he is 4th horn with the Dubuque Symphony Orchestra in Iowa.

When not performing, Jacob is an arranger, orchestrator, and transcriber. He has been arranging music for all kinds of ensembles for more than eight years. Several of his arrangements have been performed by the Oklahoma State University Instrumental Studios, the Kendall Betts Horn Camp Ensemble, the University of Missouri - Kansas City Horn Studio, and the Texas All Star Horn Professors Horn Choir. Jacob has also had arrangements performed at International Horn Symposiums, the Trombonanza Festival in Argentina, the 2018 Texas Music Educators Association Convention, as well as various schools and workshops throughout the southern United States.

As a composer, Jacob focuses most of his compositional efforts on the horn. His first composition, “In a Forsaken World” - Concertino for Horn and Piano, premiered on his senior recital in Spring 2017. Denise Tryon, Associate Professor of Horn at the University of Cincinnati College - Conservatory of Music, commissioned Jacob to write a piece for low horn and piano for her next solo album. “Maiden Voyage” was premiered at the 50th International Horn Symposium "The Golden History of Horn" in Muncie, Indiana.